These delicious chocolate cupcakes topped with cute little Santas made with buttercream will bring holiday cheer to the table and delight your guests!

My little Santa cupcakes are decorated with buttercream, two mini chocolate chips for the eyes and a red M&M for the nose. SO simple, easy and best of all, NO FONDANT!! They taste even better than they look! 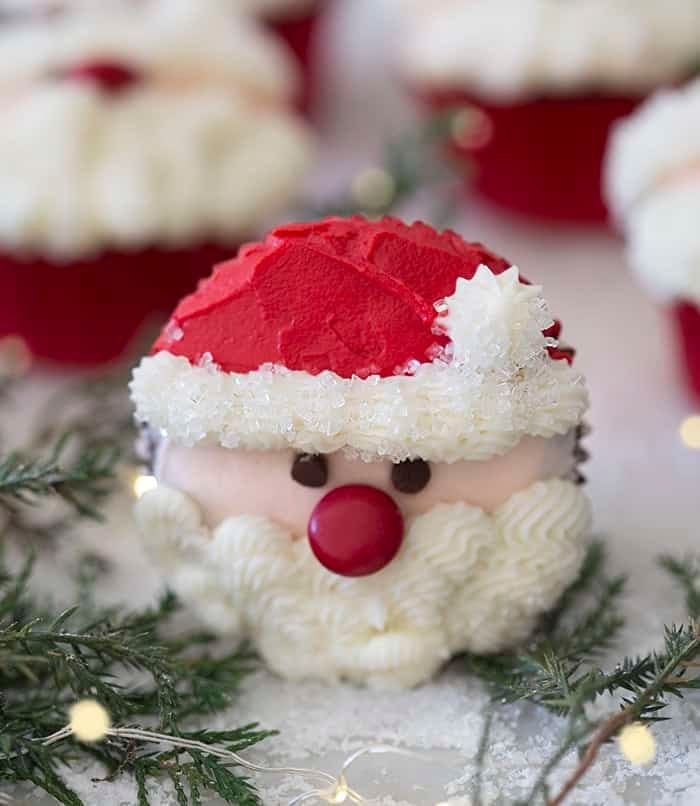 Who could say no to this face?!? Using mini chocolate chips for eyes is a wonderfully simple way to make faces on desserts without things looking creepy. Check out my Easter bunny cupcakes if you don’t believe me ?

CAN I MAKE THESE CUPCAKES WITHOUT A PIPING TIP?

YES! Snip the tip off of a piping bag or plastic bag then pipe the white buttercream. You can either sprinkle some sugar onto the white parts or use a fort to add some texture.

WHAT KIND OF COCOA POWDER SHOULD YOU USE?

WHAT’S THE BEST FROSTING FOR THESE CUPCAKES?

I think American is the easiest to work with when making these cupcakes but you can definitely use Swiss or Italian meringue buttercream for them. The meringue-based buttercreams will be less sweet, a bit creamier but also softer so dealing with them can be a challenge.

HOW TO MAKE SANTA CUPCAKES 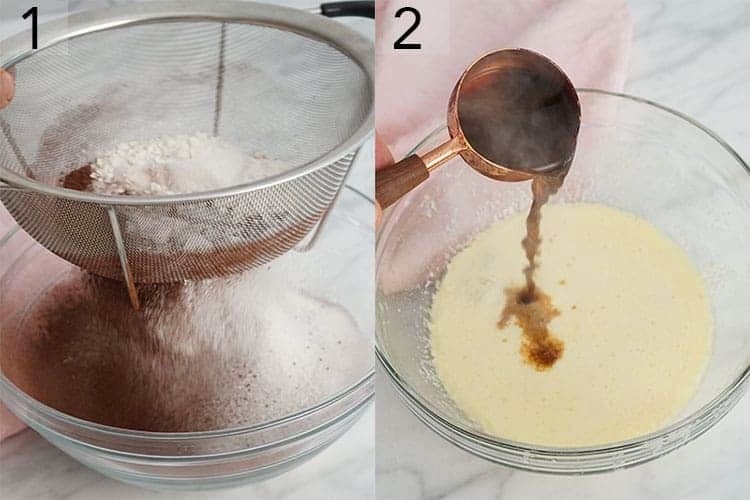 1. For the cupcakes; preheat the oven to 350 degrees and add papers to a cupcake tin. Start off by sifting the dry ingredients with the sugar into a bowl and whisk together until combined.

2. Add the milk, sour cream  into a large bowl and whisk them together. 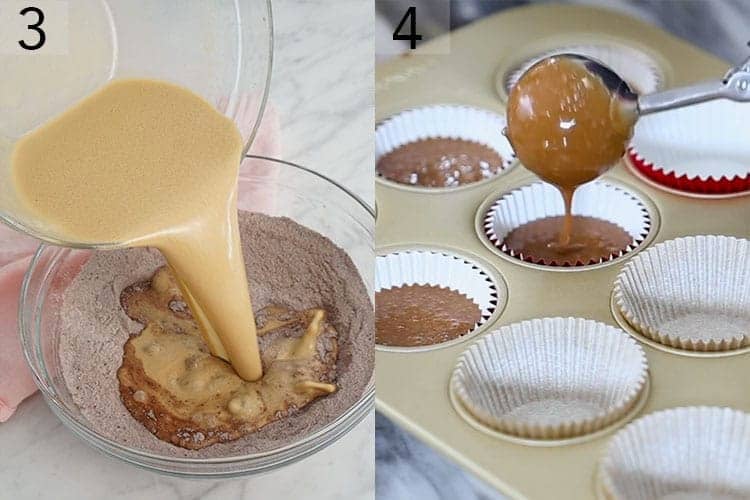 3. Add the wet ingredients into the stand mixer with the dry ingredients and whisk until the batter is smooth.

4. Distribute batter evenly into the cupcake papers and bake for about 15-20 minutes or until a toothpick inserted in the center comes out clean. Allow time for these cupcakes to cool before decorating. 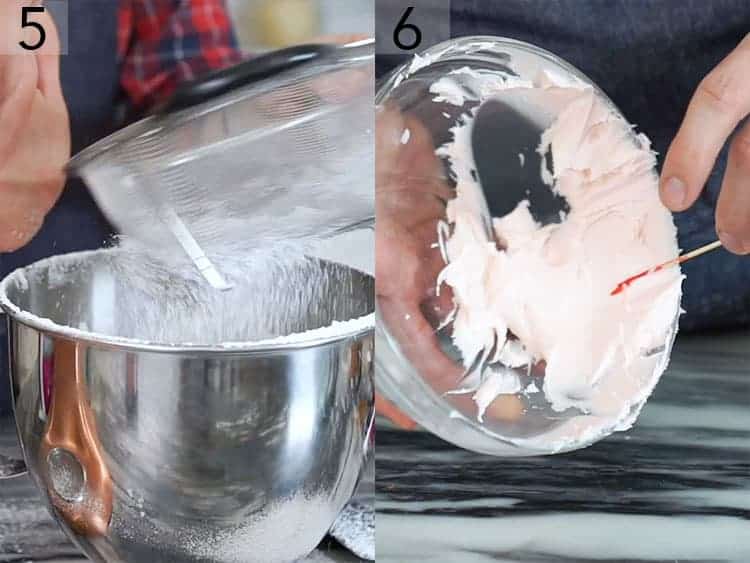 5. For the vanilla buttercream; beat the butter until light and fluffy in a standing mixer fitted with a paddle attachment. Sift the confectioners sugar into the creamed butter and add the vanilla, salt, and milk.

6. Divide the buttercream into three batches. One will remain uncolored, one will be red and the other flesh tone (whichever color you prefer for that is fine!

7. Use a small spatula or knife to smear and smooth some of the flesh-toned buttercream across the centre of the cupcake.

8. Smear red buttercream onto the top third of the cupcake. I also spread another layer diagonally from the lower right to the upper left for the fold of Santa’s hat. 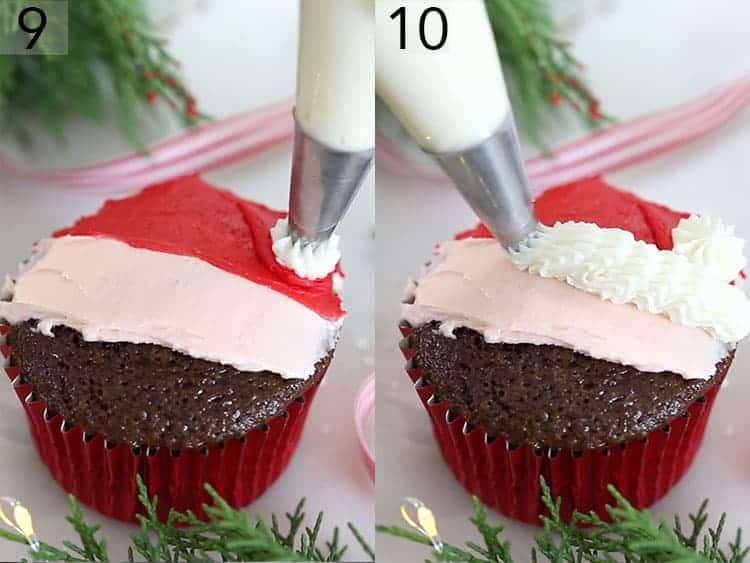 9. Use a star tip to pipe a dollop of white buttercream for the end of Santa’s hat.

10. Now use the same tip and wiggle it across the cupcake to create the hat’s trim. 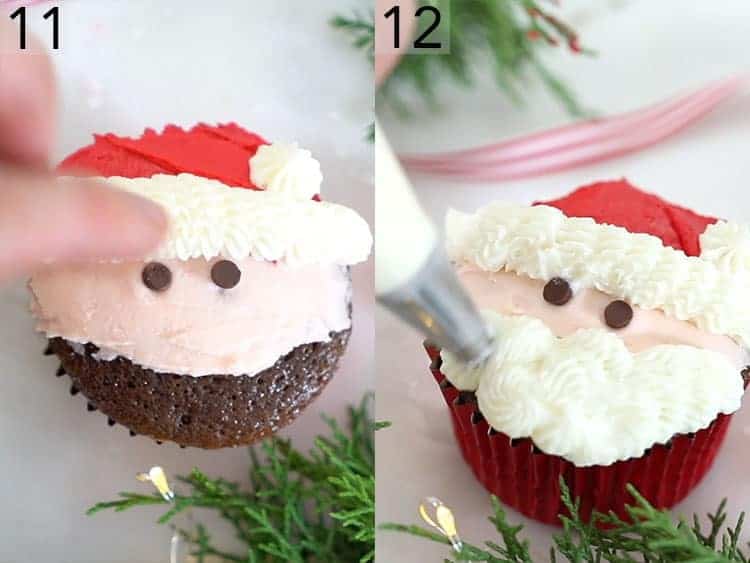 9. Add the two mini chocolate chips pointy side down for the eyes.

10. Pipe the beard with the star tip using a loopy motion to give some gentle texture to the facial hair. Use a red M&M (logo side down) for the nose. 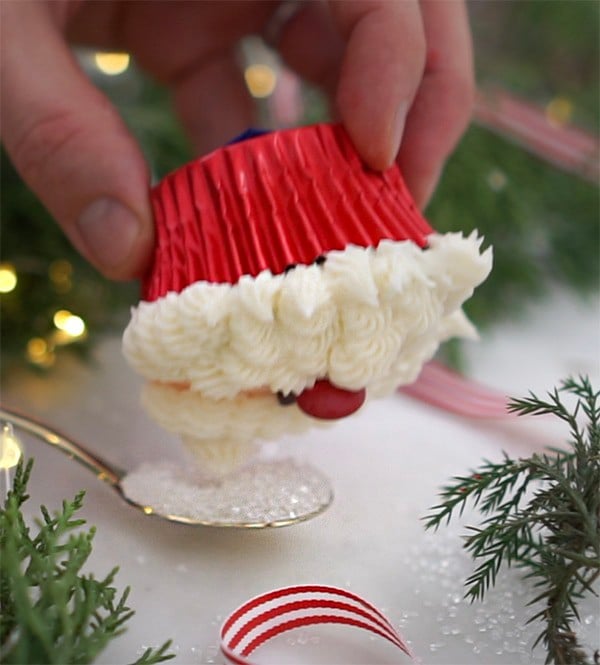 For a little extra sparkle try dipping the white trim of the hat in sanding sugar as seen above. I used a spoon full of sugar so I could control what parts of the cupcake got sanded. You could also try this step before the beard is piped on.

IF YOU LOVE THIS RECIPE TRY THESE OUT!

If you’ve tried this Santa Cupcake recipe then don’t forget to leave a rating and let me know how you got on in the comments below, I love hearing from you!

For the Vanilla Buttercream:

For the Vanilla Buttercream: